Rattak is a Renowned War Maker and Master Path Finder﻿ of The Huratt whom rule The Under of York. He is currently making a Long Run, to learn more of his peoples great enemy... 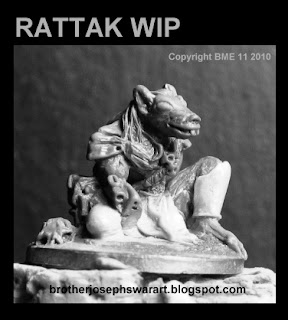 Huratt are a Dark Science Race which all but rule in The Under (more on this later) and in other remote subterranean places.
Huratt are an Evil race that hunt all Non-Rodent Mammals, especially Feline Manamals and Humans, for their Food.
The average Huratt stands about 6'6" and weighs around 260lbs. Huratt maintain a Lethal Hierarchical Society, where in the most  intelligent and physically capable dominate the lower classes.
Hurrat Warriors are terribly agile and extremely powerful. Warriors are very keen on Old Tech, and employ a variety of finely crafted Swords and Crossbows, along with many Sonic Weapons of their own design.  Huratt Raids are considered a tragedy for even well guarded settlements, and for lesser beings these assaults mean utter extinction . 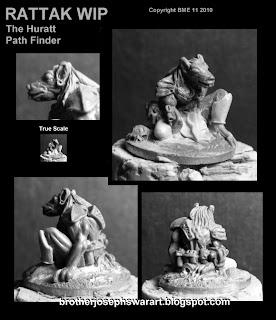 A word on Design. I am sculpting Huratt Weapons and...lol...Tailes, on separate sprues so that collectors can add fun little details to each of their Huratt Warrior Models. For my side of it as the sculptor,  I can use these bits while converting the Master Castings of the Warrior Models,  later in the Conversion Phase of Production.

True Scale: is a close approximation of the Real Size of the Original Sculpture. Basically I re-sized the image until I could hold the 3D model to the screen,  right next to the 2D digital reproduction,  and eye-ball it with the Original work...until it looked right.

I will post more Previews of other Huratt soon.

Joseph
Posted by Unknown at 6:03 AM 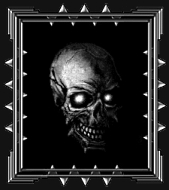 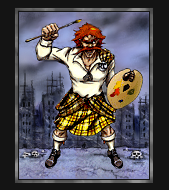